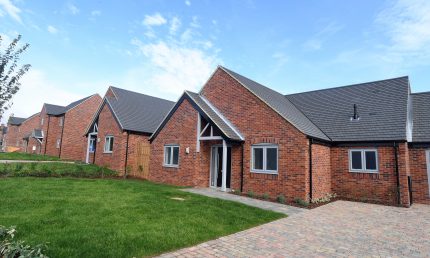 The eight prestigious houses were built on land procured through Deeley Homes from the Lamport Hall Preservation Trust (LHPT).

During the negotiation of the land sale, the LHPT requested two conditions on the development to help preserve the heritage of the area:

1) The LHTP would influence the design of the development

2) The development must include environmentally friendly features and technology

The development is located at the end of the main road within the quaint village of Hanging Houghton.

The idea was to build eight dwellings which reflected a Tudor period manor house with supporting buildings.

The manor houses, Plots 1 & 2 were the largest of the eight; Plots 3 & 4, were slightly smaller houses and would reflect barns, Plots 5-7 were a terraced ‘alms houses’; Plot 8, the smallest, located on the corner of the site represents the a gatehouse.

As stated overleaf, the LHPT required the scheme to reflect the heritage of the area whilst incorporating the latest renewable technology. This was achieved through:

A family living in one of the five-bedroom farmhouse’s has seen their fuel bills reduced to an average of around £130 per month – a fraction of the cost for similar-sized, older properties, due to its ground source heating and other green measures.

The family’s fuel bill has effectively been offset as they are entitled to claim a renewable heat subsidy from Government which could equate to £1,200 per year.

Development The proceeds of the land sale enabled the LHPT to secure funding for Lamport Hall for several years. This scheme is an exemplar of how Deeley will work with local landowners to provide developments that are right for the community they are in and leave a lasting impression.

“The involvement and support given by Deeley, from planning to construction has been professional, informative and reassuring.

"One of the trust’s key goals from the land sale was to provide protection to the heritage of the area and enable us to maintain Lamport Hall for a number of years….both of which have been met”.